The rear suspension is being reproduced with the early single triangular top link. William Heynes designed this system to generate offset loads under acceleration which counteracts the tendency to lift the right hand wheel due to engine torque. This robbed the XK120 racers of traction out of right hand corners, quite a handicap on most clockwise racing circuits hence Heynes' new system for the C Type. Traction was improved but the suspension was compromised by a very high roll centre, offset to the right and quite severe lateral axle movement as the call rolled. The lower radius arms being bent sideways. Early C Types were reported as "oversteerers" by the drivers. The high triangular link was replaced by a more conventional panhard rod during 1952 and handling was improved. Very few original C Types exist with this early system. 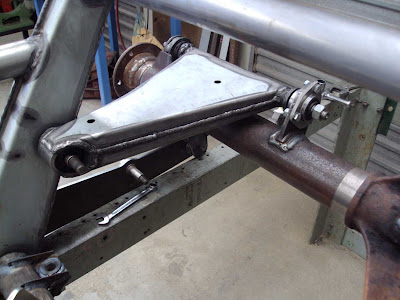